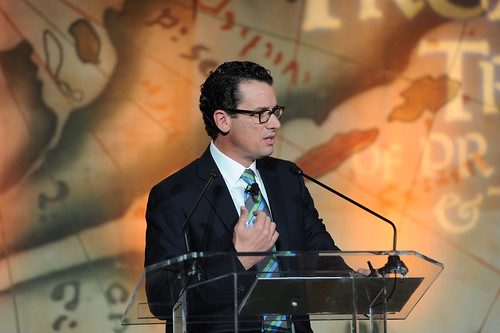 Oscar Suris is passionate about PR. Yet the former reporter, turned lead corporate communicator for Wells Fargo & Company, believes that trying to explain the work of public relations has become more complicated over the years. He says the PR industry and PR publications have good definitions that thoroughly explain what we do, however, repeating them doesn’t work at a dinner party.

He sometimes describes PR as helping people tell their stories, but he knows this doesn’t really tell the complexity of our field — PR practitioners are also problem solvers, media specialists and counselors.

So, over the years, he’s come up with the following definition that he believes sums up the whole of our profession: Public Relations helps influence perception gaps.

What is the Perception Gap

At Wells Fargo, the perception gap is defined as the gap between the company’s vision, mission and values versus its reputation with the public.

Oscar says this can apply to any company or organization, and he explained that the wider the gap, the greater the risks. He says in his office they know when it’s really wide and when it’s really right because they are constantly monitoring and listening to the public. If the perception gap gets wide about Wells Fargo, they know it’s due to the bank’s shortcomings or something they are doing or failing to do that doesn’t sync up with their mission and values.

For example, he says there is a notion that Wells Fargo is not doing anything to help homeowners avoid foreclosure.

The bank also paid back its TARP funds.

“We received $25 billion and we paid it back – thank you very much!”

Oscar explained there are all kinds of perception gaps that PR practitioners deal with wherever we work. We see it when we read the media clips and social media posts about our clients or company. He would argue that the perception gaps will always exist because the communication landscape is inconsistent, ever-changing and vast.

Communicating a New Mission and Values

After participating in the largest bank merger in history and doubling its size, Wells Fargo had to deal with a new reputation and a new perception gap. Before the merger, the regional bank was timid about communicating with the public and the media. Oscar explained that before he began working there, the CEO would tape a message about the company’s financial reports and the media would have to dial in listen to the recording.

To change this, he knew the communications team had to focus on explaining what the company stands for.  Their guide is the bank’s mission and values statement, which is published as a 34-page pamphlet. “We are the keeper of this cultural flame,” Oscar said.

One of the visions and missions for Wells Fargo is to maintain a reputation as one of the world’s great companies. To help achieve this vision, Oscar and his team implemented the following communications strategies:

“The bank has an aspiring vision and we had to rise and share the same standard in our communication to help close the perception gap.”

Wells Fargo was recently featured on the cover of Forbes magazine under the headline, “The Bank that Works.”

Since 2011, Wells Fargo has generated positive media coverage and is considered the industry’s most valuable bank. Its brand is one of the most valuable in the world. Oscar believes this is only the beginning and he and his team will continue to tell stories about the bank, use multiple channels to reach more people and have the courage to fight for the bank’s reputation.

“We still need to focus on moving the perception gap.”