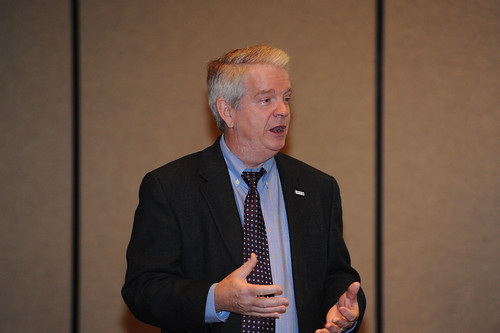 Potato, Potato, Potato. A sound that warms the heart of Harley fans, but sounds that almost went away until the motorcycle company mobilized grassroots support to help educate congress about motorcycle sounds issues. Joe discusses how the “power of one” helped save that save that syncopated Harley beat, loosed the reins of The Gator Nation and is bringing new vigor and focus to the Moffitt Cancer Center, one friend at a time.

Joe starts off his presentation with the sounds of the Harley motorcycle. (Classic Joe!) He demonstrates how things would be without that sound. He mentions the possibility of how we could trademark that sound! Joe talks about how in 1999, the federal government actually considered welding “silent” the exhaust pipes onto all of its motorcycles. So don’t laugh, it could happen!

Joe talks about how we all actually do grassroots communications every day not only in our job but at our church, our PTOs, etc.  We are trying to persuade people to do something. And when we do it for our company, our cause, or our clients, it’s not that different.

Harley-Davidson Case Study
Joe references the noise of the motorcycle and that the government was looking at changing that. The noise is part of the brand and owners want it. They started off with a high-level approach with Senator Ben Nighthorse Campbell in an ad posing with a Harley. They had also just sold a series of bikes to the secret service as well. They used those connections to start a behind the scenes campaign with the powerful people that they knew. The used those connections to get to people like President Bush and were invited to address groups that were involved in the issues. They were able to get the CEO of Harley and the head of the secret service to talk to the president about the noise issue and they discussed how they wanted to work together on the issue. Then they reached out to HOG, the Harley Owners Group, which is consists of 350,000 members. They attended rallies, events and went to dealership functions. They also reached out to the AMA (the American Motorcycle Association) which has 300,000 members because they too, needed to be aware of the possibility that other motorcycles could be targeted in the future. Then Harley announced that they agreed to stop manufacturing “loud” pipes and promotes it.

Quiet diplomacy kicks off effort. Motor Company begins to educate HOG and AMA members about motorcycle sound issues and announces the quiet pipe initiative. They also encouraged individual contact with your legislator. No printed materials were printed. It was all one-on-one conversation. In the end, the NHTSA and EPA backed off the push. The Motor Company stops producing exhaust system that exceed 80 dB (Autos 74 dB, Busses 84 dB, Trucks 88 dB). It wasn’t a complete success, because the aftermarket pipes are still popular and conversation of the noise level is starting to be discussed again.

The bottom line it was very behind the scenes and quiet campaign that was able to change the results of what could have been something a lot worse.

University of Florida Case Study
The University of Florida was at the bottom of the tuition stream compared to others in 2007. An academic and enhancement program campaign began and they did it alone in the beginning. They followed a similar approach that they took with the Harley campaign. They met with the Gator Caucus, Gators for Higher Education (was through the Alumni Association), Media Outreach, Targeted editorial board effort, FSU, USF, UCF.

So at first they need to address the tuition differential issue and started with Governor Crist, Florida Legislature, UF Students and Parents, Board of Governors and took it state-wide to raise tuition to the national average. They wanted them to give colleges the flexibility to adjust their tuition as they saw fit so that degree values would not suffer. The first year it was unsuccessful but it set the tone and laid the foundation for the next year. A website was set up for people to take action on their own. There are several links on how to contact your legislator and tips on effective communication with your representative.

At the end of the day, the legislature agreed to relax controls over tuition. UF, FSU and others can increase 15 percent, a year until national average is reached. Gov. Crist backs off statement that he’ll veto and signs the bill.

Friends of Moffitt Case Study
Moffitt is a state-charted institution much like UF, FSU, USF, and UCF. The funding model is different and they are in a competitive marketplace. Florida is number two in the nation for new cancer cases. Cancer is a big business. Moffitt has strong support from the Florida Legislature. Until recently, Moffitt had strong support from the Florida Governor. Moffitt also has a large network of friends: 55 different groups, more than 300,000 members, largely untapped.

Florida’s Governor Scott announced that he wants to create a “competitive environment’ for cancer treatment. The media jumped on the Governor’s case that he is thoughtless when it came to cancer centers. They have a meeting with the Governor to create a state-wide cancer policy. So where do we go from here … Joe then discussed the various grassroots tactics to bolster support for Moffitt and its cause.

Joseph S. Hice, Jr., APR, CPRC, MA, MBA, is vice president of public relations & marketing at the Moffitt Cancer Center in Tampa, Fla. Moffitt is the third-largest cancer center in the nation and is the only Florida-based member of the National Cancer Institute’s Comprehensive Cancer Centers. Hice is responsible for public relations, marketing, advertising and employee communications activities at Moffitt. He also directs the institution’s news bureau, conference planning and institutional advocacy efforts. He is currently leading Moffitt through the introduction of a new branding theme, “Closer to our patients. Closer to a cure.” Hice joined Moffitt from North Carolina State University in Raleigh, N.C., where he was chief communications officer and associate vice chancellor. Prior to NC State, Hice was associate vice president of University Relations at the University of Florida where he led the development of “The Gator Nation” campaign. Before joining UF, he had a long career with some of the nations most respected and well-known recreational product brands including Harley-Davidson, Segway, Sea- Doo Watercraft and others.