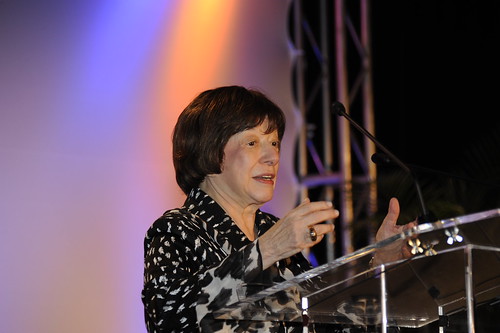 Setting the tone and pace for the 73rd Annual FPRA Conference Myra Janco Daniels took to the stage with the memorable music and opening graphics from AMC’s award winning TV series Mad Men filling the ballroom.

Tied to the theme of the conference, The Evolution of Public Relations, Janco Daniels invited attendees on an inspirational journey spanning seven decades of tenacity, creativity, determination and “rut busting” in the advertising industry, and then during her second career as founder and CEO of The Philharmonic Center Cultural Complex in Naples, Florida.

From her early days as a child of immigrant parents from Eastern Europe, Janco Daniels always knew what she wanted to be when she grew up. “In charge,” she laughs.

Inheriting a strong business acumen from her grandmother and mentor, Daniels started her first business at the tender age of four.

Following the advice of her grandmother to launch a business doing something you like and creating something people need, Janco Daniels first business was producing party favors.  Her first official business meeting was with her grandmother who taught her the basic economics of running a business. Red and black crayons led to an understanding of how a balance sheet works and that the goal was to always have more numbers in the “black” than in “red.” This was the beginning of many business ventures for the young Janco Daniels before headed off to college.

It was during her college years at Indiana State University that Janco Daniels had her first taste of advertising, creating her first ad for a local department store. The “Cool as Lemonade” ad selling women’s cotton dresses was a hit.  Running a double truck ad, the store sold out of the dresses in days.

Shortly after college graduation and at the tender age of 24, Janco Daniels started her own agency and within one year had billings in excess of $1 million.

It was during her meteorite rise in the advertising industry that Janco Daniels met the legendary Draper Daniels who at the time was the most respected ad man in the business and who would serve as the iconic image for AMC’s leading man, Don Draper, on Mad Men. The two would later marry and eventually retire in Naples, Florida where Janco Daniels began the second phase of her career, establishing the world renowned Philharmonic Center Cultural Complex.  (Insert hyperlink http://www.thephil.org/)

Pursuing success is a lifelong adventure and Janco Daniels’ shared a few pearls of wisdom from her blockbuster book Secrets of a Rutbuster…Breaking Rules & Selling Dreams.  (Insert hyperlink http://www.usmansheikh.com/book-reviews/book-review-secrets-of-rut-buster)

Myra Janco Daniels was an early pioneer in the advertising industry, blazing a trail for women in what was then a male-dominated field.  In addition to four decades of spearheading national advertising campaigns and running her own agency, she is also known for having married veteran advertising executive Draper Daniels, the inspiration behind AMC’s hit TV series Mad Men.  Retiring to Naples, Florida in the early 1980s, the restless and tireless Daniels recognized a void in the community when it came to the arts. Thirty years later, the Naples Philharmonic Center Cultural Complex is world renowned for its diverse artistic offerings.  Founder and CEO Myra Janco Daniels has led The Phil – as it’s commonly known – from the ground up. An educator and published author, Daniels recently published “Secrets of a RutBuster… Breaking Rules and Selling Dreams.”  On September 1 Daniels will draw the curtain on her tenure as The Phil’s CEO and open the door for an encore performance as she begins the next stage of her life.