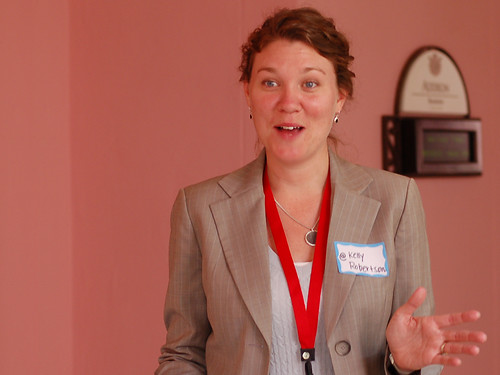 Kelly Moore Robertson, APR, Associate PR Director, Kidd PR talked about blogging, audio/video blogs, micro blogs, photo sharing and social networking. Social media definition: It’s like going to a party: you have to talk to people.  Don’t be the guy standing in the corner. You won’t get any value unless you interact.

When using social media, examples of your goals should be to build awareness, get instant feedback, foster relationships, become an expert, communicate and inspire action. Your goal is NOT to start a Facebook page. Social media is just another tool in your communications toolbox.

It’s important to understand your target. Mothers are a big demographic on Twitter; teens are on MySpace. Just like with traditional communications, go where your audience is and is already having conversations.

Social media really emphasizes the need to be transparent. If you blog on behalf of your company, disclose that up front.

Management often worries about customers or potential customers giving negative feedback. But remember, they’re talking whether you’re listening or not. Just because it’s not on your Facebook page doesn’t mean it’s not happening. At least this way, you know what’s being said and can address it. The benefit with social media is that your audience is already interested in hearing from you, you have the opportunity to have a two-way conversation.

Blog: Probably the oldest social media outlet. 270,000 words a day are written on Blogger (just one of many blog tools)
Best Western has a great blog: On the Go with Amy. The blog follows Amy’s experiences traveling, where she uses the money she saved on hotel rooms (by staying in Best Westerns) to do other fun things in the town she visits.
Blogs need to be updated regularly. At least once a week minimum, daily is preferred.

Audio/video blog: These are a lot more personal and allow to connect better than just a written blog. President Obama has an audio, video, and written blog. Video of all his speeches is posted on the white house Web page. (www.whitehouse.gov/rss)

Microblog: Twitter: The most common objection: “Who cares what you ate for breakfast?”
No one.
So don’t use it that way. But for a business, Twitter can be a great tool. It’s an older demographic using Twitter, so it’s a great way to reach professionals.
Businesses using it right: Coffee Groundz (@coffeegroundz): Saw a  200% increase in business since people can now order online via Twitter. It started with someone Tweeting asking if they could pre-order a bfast wrap. Coffeegroundz said yes, and online ordering took off.

Remember: Social media doesn’t run 8-5. You can’t shut it off on the nights and weekends.

Business using it wrong: On a Thursday, Motrin launched an ad campaign showing moms needing Motrin because of the pain caused by carrying their baby in a sling. Over the weekend, moms tweeted hundreds of thousands of protests while Motrin execs were off for the weekend. When they came back in the office on Monday, they had been hit with the “motherlode” in negative coverage. And rather than addressing the complaints, they retreated.

www.search.twitter.com: even if you don’t have a Twitter account, search for your organization so you can see what people are saying about your company. You can search geographically to see what customers and potential customers are saying.

Video sharing: YouTube. Post videos of events, press events, commercials, etc. They can live on long after the event or money for the commercial campaign runs out.
TMobile organized a flashmob event in London. It’s a short-lasting event (2:40 in a London train station), but over 13.5 million people have viewed the video. (Life’s for Sharing, the T-Mobile Dance)
Ruby Tuesday planned to demolish an old Ruby Tuesday’s restaurant to promote their new renovations. They “accidentally” demolished an old restaurant next door, creating a lot of buzz about how the mishap could’ve happened. Execs played into the confusion and further kept the conversation going.

Photo sharing: Flickr has over 220 million visitors a month. You can set up a page and upload your own photo sets for an event, etc. Or you can create a group with a topic and allow others to load their photos. You can only approve the photos you want.
iPhone started a group of photos taken with an iPhone. So far, 4,500 people have uploaded their photos to the group.
You have a lot of control: can decide whether people can post comments on your photos.

Social networking: Facebook. Fastest growing group of users is 35-54 age group. Started as a college-based pool but older demographic is using it more and more. Great way to foster relationships. And it can be your online hub: Flickr, YouTube, Blogger, Twitter, etc. can all be linked from your Facebook page. Having all these linked also really helps your SEO.
Two techniques: Facebook page for your company or Facebook group. Page is recommended for groups. You can integrate all your other SM tools, can post status updates that goes to all your fans (captive audience) instantly, you can choose whether to allow visitors to post on your wall, create events and more. Pages’ administrators are private information. With a page, you can track demographics of visitors to your Facebook page.
The one benefit of a group is that you can send e-mails to all your followers via Facebook. Administrators of a Facebook group is public.
First Mariner Bank Facebook page

Monitoring 24/7:
Google analytics is a free service to monitor who’s coming to your site, when and how.
Facebook pages provide demographic analytics
YouTube provides analytics on visitors to your videos. Not just number of views, but where they’re from, etc.
Comcast doesn’t have the best reputation but they have @comcastcares to monitor conversations about Comcast and respond to negative comments as well as promote new products/services.
HR Block, during tax season, monitored tweets about taxes, forms, problems, etc. and offered advice and forms to people looking for guidance.
Bottom line: People are talking about you (your company) and unless you know what they’re saying, you can’t communicate effectively with them.

About the speaker:
Kelly Robertson, APR is the Associate PR Director and Social Media Strategist with Kidd Public Relations. Headquartered in Tallahassee, Fla. this full-service agency has successfully implemented full-scale marketing campaigns for local, state and national clientele for 30 years. Having worked at Kidd for nearly a decade, Kelly has extensive experience planning and coordinating communication campaigns across the country. She is the agency guru when it comes to social media implementation, media relations and strategic messaging.

Kelly has worked on client accounts ranging from transportation to technology in both the government and private sector. She frequently receives her own byline in publications and has garnered media coverage for clients in outlets such as the New York Times, CNN, MSNBC and national travel publications.

Specifically, Kelly oversees the Kidd social media division, helping navigate the evolving world of communication, conversation and community. She advises clients on how to turn social media into advantageous outlets which foster direct two-way communication with their target audience. Whether the new media initiatives are a stand-alone effort or part of a dynamic integrated campaign, she is able to use a systematic and targeted approach to yield measurable results.

Kelly studied at Florida State University earning a degree in Communication with an emphasis in Public Relations.