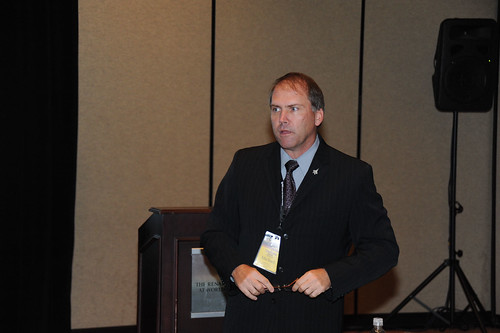 In Breakout Session 5B, we heard from Michael Rein who describes his role in Communications at Lockheed Martin. His job is to promote the F-35 II jet fighter program, the largest Department of Defense acquisition program in the history of the United States, valued at more than $380 billion.

More than 3,000 jets are being built that will be flown by the U.S. Air Force, Marine Corps and Navy, and 10 foreign nations including Australia, Canada, Denmark, Israel, Italy, Japan, Norway, the Netherlands, Turkey and the United Kingdom.

According to https://f35.com/the-f-35/faqs.aspx, The F-35 Lightning II is a 5th generation fighter, combining advanced stealth with fighter speed and agility, fully fused sensor information, network-enabled operations and advanced sustained. As new threats to freedom emerge, it is more important than ever for U.S. and allied fighter fleets to have the F-35—the world’s only 5th Generation, international, multi-role aircraft, capable of countering current and future threats.

Managing the public relations requirements of such a vast program involving many different national governments and cultures is challenging. Michael discussed how Lockheed Martin synergizes the best of corporate communications and its domestic and international PR agencies to accomplish this task.

Some of his duties include highlighting program accomplishments, supporting media requests and supporting internal audience as well as leveraging print and electronic releases, social media, media briefings, one-on-one interviews, op-eds and more. He explains that the message has to be different for different countries. The goal is to tell the F-35 “story” as much as possible.

The F-35 web site has many different storytelling methods such as a video series called “Test Pilot Tuesday.” Each video features a different test pilot who shares experiences in the F-35. It gives a human touch and offers vignettes and anecdotes about life as a pilot. Visit https://f35.com/resources/test-pilot-tuesday/video-archive.aspx to find out more.

The F-35 communications team also strives to engage possible supporters and the public. One way of doing this is the “The Lockheed Martin F-35 cockpit demonstrator,” which is an interactive simulator used to highlight the aircraft’s advanced technologies and combat capabilities. According to https://f35.com/news-events/cockpit-demonstrator, Cockpit Demo tour allow political representatives and their staffs, the news media and selected suppliers’ key employees the opportunity to “fly” the demonstrator to better appreciate the 5th generation attributes of the aircraft. In addition to discussions about the aircraft’s capabilities and program status, the team provides information related to economic impact and the contributions made by area suppliers in support of the program.

To date, there are more than 1,300 suppliers that support the production of the F-35 program in 47 states across the nation.

The Lockheed Martin F-35 cockpit demonstrator is back on tour, showcasing the F-35’s capabilities across the country.

Michael and the F-35 Communications Team have a big job, but shared some great tips that any PR or Communications professional could use. Thanks to Michael for taking the time to speak at the FPRA Annual Conference!

Michael J. “Mike” Rein serves as director, F-35 Program Communications for Lockheed Martin Aeronautics, located in Fort Worth, Texas. In this position since March 2011, he leads a staff of eight and is responsible for
all communications activities associated with Lockheed Martin’s F-35 Joint Strike Fighter Program. The U.S.
Air Force, Navy and Marine Corps, along with international partners, have combined efforts to produce a low-cost, technologically advanced jet fighter – the F-35 Lightning II. The multi-role, supersonic F-35 meets the requirements of all services with enhanced lethality and survivability, and reduced vulnerability. Prior to joining Lockheed Martin, Rein held the position of communications and customer relations manager for United Launch Alliance, a Lockheed Martin – Boeing Company joint venture, at Cape Canaveral Air Force Station, Fla.