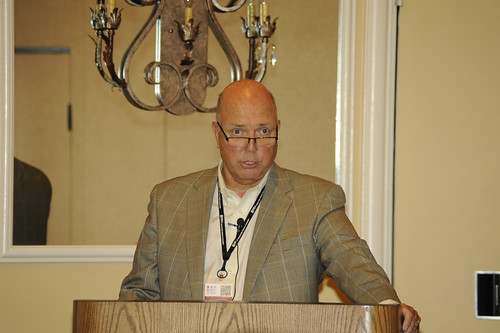 This proverb illustrates Mosaic’s approach to dealing with the hostile public environment that surrounds the issue phosphate mining.  To prosper, Mosaic needs to continue mining in a positive atmosphere with public approval.

Some background:
Phosopate is a vital natural resource found more in Florida than other states.  Phosphate rock is processed in Florida and shipped around the world.  Phosphate mining goes back to the 1800s and is one of the oldest industries in the state.  Mosaic fertilizer is used by farmers to grow crops, and is an integral part of the food chain.

About 10 years ago, communities in Polk and Hillsboro counties began to run out of phosphate reserves.  At that time, Mosaic needed to begin mining elsewhere along the west coast, which means approval of permits and getting approval from citizens and local governments.  Because of the controversial nature of phosphate mining, negative headlines quickly began to appear in the papers, and phosphate mining became a hot political topic on Florida’s central west coast.

To gauge public opinion, Mosaic surveyed the public in their target communities.

From the survey results, Mosaic crafted a long-term plan…

If you want one year of prosperity, plant corn

Television was followed with direct mail.

Finally, this stage was accompanied by a website which responded to key issues and misconceptions http://www.floridaphosphate.com/

If you want 10 years of prosperity, plant trees

At this point, Mosaic updated the campaign with the intent of to deepen their roots with people.  At this point, they chose to introduce the Mosaic brand and branding it as a company.

Television ads focused on Mosaic as an environmental steward and an innovator on the cutting edge of energy efficiency.

Mosaic’s latest campaign: “I am Mosaic”

Television ads showing the economic impact of Mosaic, and show the number of people who are employed by Mosaic, as well as those who are economically dependent on Mosaic.  Also focuses on employees and jobs within the company, as well as Mosaic’s environmental stewardship.

Outdoor billboards are also included regionally in areas that were part of Mosaic’s environmental footprint.

The strategy also includes online banners on websites of newspapers that cover Mosaic and phosphate issues.   That way, even if there’s a negative story about phosphate, there’s still a positive message about Mosaic, too.  The banners link to http://mosaicfla.com, which is a website focused on the campaign message.

Finally, direct mail is about to drop.

All of the print media uses consistent recognizable graphics.

The “planting trees” part of the campaign also utilizes targeted positioning ads.  These ads are print-only.

If you want 100 years of prosperity, educate people

Up until this point, this was mostly advertising and campaign work.  These legacy projects go beyond advertising and PR, and focus more on education… and making sure that Mosaic doesn’t just “Talk the Talk” but also “Walks the Walk.”

Because Mosaic owns enough land to make a difference, this stage includes the building of education centers, wetland habitats, and nature trails.

Through these initiatives, Mosaic shows they’re ready to walk the walk.

Q: What is Mosaic doing with the Tampa Bay Rays?
A: Mosaic has partnered with the Rays through “Home Runs for Food.” For every home run hit, Mosaic contributes $500 to Feeding America.

Q: Have you done any post-surveys since the initial survey?
A: Mosaic has done them every year.  After learning that the phosphate industry hadn’t been telling its story well, now they’re moving the needle.  After two years of the initial “Florida Phosphate” campaign, the numbers moved enough that they were comfortable with promoting the brand as opposed to just the industry.

Q: How has the campaign impacted local governments (county commissioners, etc)?
A: Before the campaign, even politicians who supported the phosphate industry steered clear of it.  Now they’re more comfortable with talking about the issue.  When applying for mining permits, Mosaic has seen a less litigious environment in several counties.  They have also seen a difference in attitudes of commissioners—now phosphate mining isn’t necessarily viewed as a political risk any more.

Q: What kind of internal education did you pursue?
A: Mosaic produces an internal newsletter, and any time they launch a new ad, it’s sent to employees to view first.  Mosaic conducted an employee poll, and asked what kind of communication their employees would prefer.  The response was a request for more face-time with senior management, so now senior managers do Q-and-A sessions with employees.

Q: Have other industries approached them about the campaign?
A: No, but one of their competitors started a smaller program to piggy-back off of the “Florida Phosphate” buzz.

Q: Have you incorporated social media?
A: Slowly.  They have twitter and facebook, but have typically made it more issue-specific rather than brand-oriented

Q: This campaign is very long-term… research started in 2005-6.  Did leadership know the plan would take that long?
A: Was always presented as a multi-year plan. There has been some pressure to back off of the campaign because of cost.  To steer clear of budget cuts, they try to show the cost of stopping the campaign.  They take every opportunity to remind corporate management of its success.

Q: How do you work with people still stuck in the negative mindset towards phosphate?
A: Mosaic opens its doors to both enemies and friends, by doing tours of facilities and being open.  They conduct about 200 tours a year.