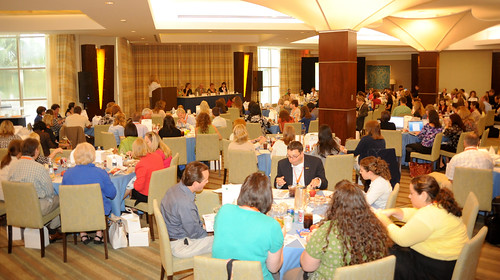 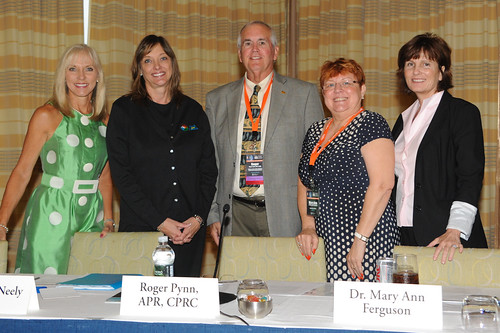 Now into month three of the disastrous BP oil spill in the Gulf of Mexico, PR professionals across the state are dealing with the fallout. During lunch we heard from a panel of PR experts who are on the front lines of the crisis.

Q1 – for Carol Dover, FMP, president/CEO of the Florida Restaurant and Lodging Association – When was the first moment you realized the impact this event was going to have on your industry?

Carol shared that things have actually gotten worse, because now we’re moving into the claims process and it’s become very challenging for her industry. This is so different from anything ever dealt with before. In Florida, we’ve learned to deal with hurricanes and as a country we had to deal with 9/11. If you put all the hurricanes together and 9/11, Carol expressed that this oil spill is still much more than what we have had to deal with in those events.
With a hurricane, you know what to expect. With the oil spill, Carol mentioned that they’ve gone in each day not knowing what to expect. The Florida Restaurant and Lodging Association had to deal with tons of misinformation and perception problems. She shared a video with clips from press conferences and other events with officials proclaiming that Florida is open for business – a key message of the response.

Q2 – for Joanne McNeely, bureau chief with the Bureau of Florida Seafood and Aquaculture – How have you managed the crisis? What long-term strategies have you set in place to deal with it now and in the future?

Joanne expressed that Florida Seafood and Aquaculture has a different avenue than the Florida Restaurant and Lodging Association in that it’s responsible for seafood. The first thing they did was to put up a seafood hotline. On the hotline they shared information about fishing areas for consumers. The fishing areas closed were far away from Florida fishing areas, but the public didn’t necessarily know that. They also turned to online banners to get messaging out there, because you can get content up so quickly. Everything in the response effort had to be quick. Knowing that if messaging changed, online ads could accommodate quickly. The online ads were published locally and nationally.

Florida Seafood and Aquaculture also conducted a survey with feedback from those that ate seafood. This provided additional insights for strategy and messaging. As a side note, Joanne expressed how federal agencies have really worked together. Seafood has always been safe, but it’s being inspected more now than ever before.

Additionally, they predominantly used web and social media since messaging changes so frequently. Joanne discussed how they put up webcams at restaurants and retailers in cities on the Gulf to show visitors that people are there eating seafood, no oil, etc. She also mentioned how they are considering moving the webcams to the Keys. The goal of this is to ensure consumers understand that the products are safe.

Q3 – for Susannah Costello, brand director with VISIT FLORIDA – How did you manage the crisis and what are some of the long-term strategies you’ve put in place?

VISIT FLORIDA began with the same message as Carol Dover’s team at the Florida Restaurant and Lodging Association – Florida is open for business. However, as the oil continued to spill the messaging evolved to focus not just on the fact that Florida is open for business, but to also include the scale – Florida has 825 miles of beaches. It’s not just about bringing tourists here to Florida, but bringing repeat visitors.

Susannah also discussed how the team leveraged assets – particularly using its website (VISIT FLORIDA has the #1 destination website). They posted a travel update so consumers could see what’s happening. But media were on the beaches with their own tune. They knew there would be a statewide impact because the Florida brand is statewide. So they needed to develop something that was scalable. In doing so, they created a crisis communication plan with multiple phases – phase one dealt with the economic impact; phase two dealt with oil on beaches; and phase three was full on crisis communications needed to reinvent the brand.

They used those opportunities to bridge messaging to Florida live. And some PR elements included press releases, proactive pitching, media assists, etc. They reached out to partners and provided Florida live as a widget, among others.

Check out sharealittlesunshine.org where you can invite someone to visit Florida, and help our state’s economy.

Q4 – Roger Pynn, APR, CPRC, president of Curley & Pynn – The Strategic Firm – Tell us about the research conducted and how that impacted the decisions made.

Working with South Walton, Roger shared how research was key to his client’s response including that the average person interviewed had been there 22 times. This showed that return visitors needs to be a primary target audience. Although, research determined that they had to help drive traffic to return visitors, with the opening of the Northwest Florida Beaches International Airport two weeks after the Deepwater Horizon Oil Spill, it was apparent that new visitors need to be reached as well.  With the opening of the airport, the region thought they’d receive international attention, but not like this.

One tactic South Walton rolled out was bswupdate.com, a blog that provides South Walton updates including photos. It has received 650,000 visits. Roger pointed out that this blog definitely reached its audience. The area didn’t need millions of hits. This simple blog has done more to get their messaging out than other tactics.

Q5 – Dr. Mary Ann Ferguson, professor with the Department of Public Relations at the University of Florida – As an expert in corporate social responsibility, what does BP need to do to repair its reputation?

The current wisdom on corporate social responsibility says it should fit. On the other hand, research was inconsistent on the effects of the fit of corporate social responsibility. Dr. Ferguson shared that when you have a poor reputation and do a program with a high fit, like BP doing an environmental program, it tends to backfire and instead will provide negative effects. If you’re looking at trying to improve reputation, if reputation is poor then don’t engage in high-fit programs. It will backfire. People will be skeptical.