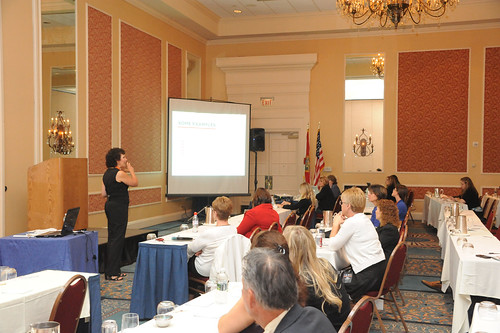 Stacey Smith, APR, Fellow PRSA, senior counsel with Jackson, Jackson & Wagner, provided great insights showing the role and benefits of using social media so that we have a thoughtful strategy for its use. She started by telling us that we need to stop ourselves from going to workshops that tell you to just join social networks, and instead stop and focus on the Strategy. What we tend to do is focus on details rather than strategy. Instead, stop and think: what are we trying to achieve? How do we measure this?
Why behavior? Attitudes and opinions are great, but they don’t lead to behaviors and actually get people to do the action item. Behaviors are hard to achieve, but are important to look at because they’re measureable. Behaviors that are possible include: Get someone to do something, not do something, or let an organization do something.

Also discussed the Behavior Public Relations Model and stakeholders. You’re probably familiar with the adoption stages: innovators (example provided are those that have iPad/iPhone4 and make up 3-5 percent of population), early adopters, late adopters, majority and laggards. If so, then you know you need to understand where your target audiences are in the adoption stages. Stacey added that most of our target audiences are laggards.

The diffusion process is a precursor to the behavioral model. It’s important to understand the one-way and two-way sources.

Social media uses in supporting relationships primarily include the awareness and interest building stage. Consider what you are currently doing, then look at social media as it can enhance reach, better targeted to some through fan and group pages, tweets, web pages, blogs, ads, maps, etc.

Ultimately we need to focus the most on how we find stakeholders and how to reach them. To assist in getting stakeholders connected in some organized fashion in order to build, expand, manage, track relationships and a connection with your organization. Social media is a TOOL to help build relationships and gain mutually supportive behaviors, NOT the entire relationship in and of itself! Focus on that and use it strategically where it’s useful = awareness and interest building.

She reviewed some examples and added that finding them is hard, but there are good attempts and ideas:

The more we can get to engagement, the more people will give us the behaviors that we’re trying to achieve. You can’t put all your apples in one basket thinking social media is going to do what you want it to do. We can’t all jump on this bandwagon and do this if it’s not going to work for our needs.

She then reviewed content ideas for Twitter and Facebook and outreach opportunities related to social media with an emphasis on integrating all the platforms with one clear voice. Also added that it’s important to reach out to the older demographic if they’re your target audience – don’t leave them out.