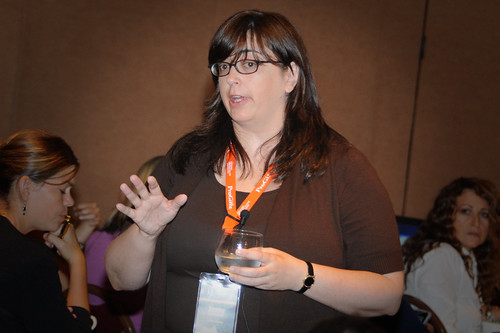 Bio: Jenny Dervin joined JetBlue in 2005 as Director of Corporate Communications, and is responsible for the execution of the value airline’s media relations and crewmember communications functions. Prior to joining JetBlue, Jenny was with Delta Air Lines in a variety of communication positions, including speech writer for the president and program director for the operations functions. Jenny got her start in communications at Trans World Airlines as staff writer, eventually running the monthly newspaper and internal communications for the St. Louis-based airline. Jenny graduated from Columbia College Chicago with a degree in journalism and now calls New York City home. She feels lucky to have been able to combine her love of travel with her passion for communications. “Working for an airline is the best communications job ever,” Jenny says. “Every day you deal with something new, and communicators are a respected business partner.”

Dealing with reporters is now 10 percent of my time. Looking at what people are tweeting about JetBlue is 80 percent.

Example:  US Airways flight 1549 landing on the Hudson River was on Twitter in 9 minutes. The corporate communications department didn’t even know it had happened!

Practice! Imagine what’s the worst thing that could happen?  It’s often the little things that gain the pass-around factor.

Example: The February 14, 2007 ice storm in NY.  We were looking at three different weather forecasts. Two said it would clear up by 10 a.m. but the third said it would continue to ice. It was the beginning of President’s Day weekend; people were getting ready to go on vacation, taking 8 a.m. flights to warmer climes. The flights were put into a de-icing queue based on the two forecasts we received. We had about 10 aircraft on the tarmac for 6 hours or more. People were sending their “iReports” to CNN. This situation was one which we were not able to recover and the story became about our management response to the problem, not about the ice storm.  An operational issue became a reputation crisis. We tried to power though instead of cancelling flights and resetting for the next day. On February 20, founder and CEO David Neeleman produced a video for YouTube, a direct, from-the-heart unscripted message. It was followed up with an email message sent directly to every customer who had ever flown JetBlue.

While this was a case study of an operational mission gone badly, it was also a case study in recovery. At no time did JetBlue dip below revenue predictions. There was no lost revenue throughout the crisis. We apologized. We asked for forgiveness and promised to change whatever was needed so a situation like this would not be repeated.

Our corporate communications strategy became: Build goodwill through daily engagement; cash it in when you need to.

When February 2010 rolled around with another ice storm looming, a message went out on JetBlue’s blog, which said in part: “With the forecast calling for icy conditions throughout the day, we decided to cancel flights rather than wait and see with our customers in the airports.  Why?  Because on the suckiness scale, getting a call that your flight is canceled while you’re still at home, at a hotel, or at your family or friend’s house is a lot better than getting up early, going to the airport and waiting for hours with the possibility of flight cancellation to come. Still sucks. Just a little less.”

Q: How do you promote the blog and attract visitors?
A: It’s promoted softly, as it was just launched. We link from the official Facebook page and other crew members will personally link to it. Social media is going to be part of everybody’s job in the future.

Q: Explain JetBlue’s different Twitter feeds:
A: @jetblue – Finally asked what do you want? Response was requests for info on deals, where we’re flying to next, etc. This is the official Twitter feed.

Q: What is your policy on social media?
A: Our policy is 508 words long and basically says “Don’t be an idiot.” If you identify yourself as a crewmember (employees are referred to as crewmembers) you may be mistaken as an official spokesperson. So put a disclaimer in your profile. The only real rule is: don’t do it at work when you are supposed to be working. Humans will find a way to connect, and we are a human business. For our official threads we have a training program.

Q: What is your social media strategy?
A: We are still developing it, doing a lot of experimentation. Our basic strategy is: serve the customer, whatever they need. We don’t resolve issues on Twitter, but point people in the right direction. We can’t solve problems online without violating issues of privacy. Our overall strategy is morphing to becoming an influencer in social media. Social media is the only time you can get your entire message out to the public.

Q: How do you engage traditional media through social media?
A: We don’t over-serve social media. We don’t differentiate social media, it’s for the public. We view every customer as a reporter. Our key media are different – we will reach out to them and ask if they want our side of the story.

Q: How many people are on your corporate communications team?
A: We have 15 people including 3 on media relations, 1 on social media, 1 videographer, 1 on internal communications, 1 blog writer. In a crisis, our junior members become monitors – they monitor Twitter, Facebook and Google. We also use Twitterfall for real time mentions that might need response to a crisis.

We’ve never had the fantasy that the message from corporate communications is what people are going to tell their family and friends. To help maintain the message we use our internal communications channel to tell our crewmembers what we are telling the media. No one in the company is allowed to say “No comment.” In our manual, the Blue book, we instruct crewmembers that if they are approached by the media the correct response to a request for information is “I don’t have all the information, please contact corporate communications.” If pressed, they are instructed to say “That’s not what I was hired to do; I do not speak on behalf of the company.” This is part of our cultural orientation.