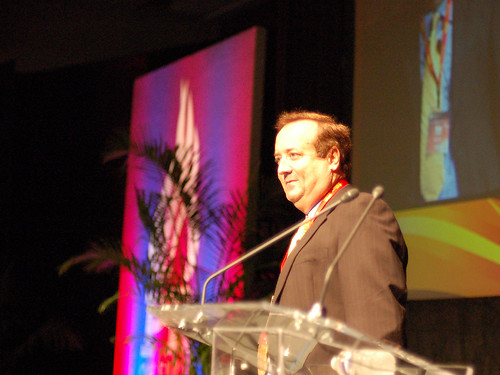 Tom Hoof passionately talked about how the Tampa Bay Rays took a broken brand – Tampa Bay Devil Rays – and turned it into a winning brand to hit it out of the park! Using tried and true public relations strategies the team was transformed from “bad boy” to “community player” with an integrated marketing communications approach. Let’s play ball!! Finally, after 20 years of planning, negotiating and singing “Take me out to the ballgame”, baseball fans in South Florida were taking the seventh inning stretch with their own team! In 1998, Tampa Bay Devil Rays brought major league baseball to the area!

In the beginning, the going was rough and the team was struggling to get out of the bullpen! The brand image was in disarray. Attendance began to fall and the team was striking out with the fans. Less-than-favorable relations between fans, players and employees and a losing record become the norm. Owners blamed the fans but they didn’t do anything to improve relations.

Things began to turn around in 2005, when a new owner came out of the clubhouse with a creative campaign that was tagged “Under Construction”.

Rightly so, the first order of business was to rebuild relationships… and the brand.  It’s been said that if you build it, they will come! The new strategy started with measurable promises to the fans…and the organization did everything they could to make sure they were fulfilled! This included free parking, permission to bring their own food/sodas into the park and other above-and-beyond gestures.

Reconstructing the brand was an integral part of the campaign and it included touting the magic of baseball, the family experience, and the many benefits of Tampa Bay, embracing the community and earning a reputation for being sharp. These core values help the organization make decisions.

Community involvement became one of the major building blocks and it started at the top.  Directors and top executives each became members of at least two non-profit boards and engrained themselves into the community.

The organization also found an avenue to use their expertise to benefit the community in other ways and help grow future baseball players by refurbishing at least two little league fields a year – priced at about $100,000 per field!

Aside from resources, they contributed funds to non-profits throughout the area. They took the extra step to include personal community contribution provisions in play contracts.

Thanks to a strategic marketing move to target MOMs, the tactics they used resulted in a grand slam and attendance increased in the next two years.

With a great foundation for the brand already laid within the community, they worked on a new name, new logo and new attitude! The integrated new look helped to move away from the old and capitalize on new changes.

All PR professionals know that a change of this magnitude cannot be implemented without first conducting research.  With the help of a NY agency, fans were polled and 1,700 potential name choices finally ended back at home plate with “Rays”. Colors and logo were carefully considered and marketing the results was high impact. Changed from a bottom-feeding fish to sunlight and sparkle.

By 2007, the marketing team was ready to put together a plan that would make the launch event special. They developed a teaser campaign including unique tactics. What is more impressive than Kevin Costner and his band launching the new logo at a local concert event that was publicized and promoted like crazy! The event received national attention. They included the new logo on virtually every space available at the event but kept it unveiled until a kick-off video was presented and all was unveiled at one time. The strategy had a major league impact and the next day follow up was incredible with players and coaches making the rounds throughout the community promoting the change and sporting the new colors/logo.

A bonus partnership with Champs helped to grow the excitement and reach target audiences and merchandise campaign went gangbusters after the launch. The brand is strong attendance is up and the crowd is going wild.

Tom explained that he is in entertainment marketing for a sports team. They target families with special weekends, fun promotions. They utilize print, TV, print, radio, outdoor, new media, social networking and street teams who go out into the community and live the brand. They have also added a summer concert series after a game with top-name talent which is adding to the buzz! The diverse list of concert headlines ensures that every demographic is reached. OK, you might not be an LL Cool J fan but what about Loverboy or Trace Adkins??

Post-season campaign: ensures top-of-mind awareness and targets the sports fan with pre-sale season tickets. They also utilize some of the popular players to promote the Rays experience. The most recent campaign is “baseball is beautiful”. Various versions of the TV spots are geared toward multiple target audiences. Print, billboards and radio support the campaign.

Media promotions: also integrated within the campaign to promote TV and radio spots. The idea is to cover all the bases and come at the target audience from all angles.

Street team: appear at hundreds of events per year. This includes large festivals, small community festivals, sponsor locations and more. The teams consist of college age employees knowledgeable about the Rays and comfortable speaking to fans of all ages. They have 3 vehicles, a boat, games and give-aways. They also have a parade float!

Question: What do you see happening with the new stadium? There are some people who are against it.

Answer: Tropicana field has been good for us. Some are against a new field, some are for it. We are staying out of the preliminary talks to a certain degree.  A group of community businesses are looking into options. We are taking a back seat and listening to our fans and once they have definative options, we are willing to talk about plans.

Question: When you were apologizing for past practices. Did you target audiences? What was the strategy?

Answer: it was easy…we had to rebuild the relationships with everyone! This included sponsors, season ticket holders, community players, politicians and even employees. The “Under Construction” campaign helped us buy the time we needed to get it right. We spent hours, hours and hours over years developing our strategy.

Question: You have a large staff. How much of this fabulous branding campaign was implemented internally or externally?

Answer: I inherited an agency from NY and they have been great. We have a candid open relationship so it is easy to work with them. They handle the collateral but most of the brand strategy and implementation is developed internally.

Question: Why add concerts to your offering? What was the strategy behind it?

Answer: If we had popular games on weekends (Yankees, Red Sox) we could make our season with just those attendance records. But if we had less local popular teams scheduled on the weekends we knew we had to have another incentive for weekend attendance. The concerts drew the crowds and the strategy has worked very well!

Question: How much longer should I hold on to my Devil Rays memorabilia to make it valuable on E-bay?

Answer: Most likely, a long time! Maybe 10-20 years. We would have to have a few more winning seasons.

Question: Since your target audience is families. How do you deal with some of the player behavior issues?

Answer: We had some issues with players in the past. We HAD! We now do the best that we can to ensure that our guys are the good guys. We get to know their parents and know their background before they join the team and we try to engrain our core values and beliefs in them while they are on the team. They know what we expect.

Question: After last season’s thrill are you concerned about how to keep this going?

Answer: It is really important to put a good product on the field. We are challenged because we are maxed out with payroll and we can’t compete with some of the other teams. We might lose some of the good players, but our biggest promise is that fans who show up at our field will have a good time.

Question: The street team is a great idea. What about green efforts reflected in your choice of vehicles (Hummer)?

Answer: We bought the vehicles before everything went green. Our Tahoe was donated and is a hybrid so we are heading in the right direction. We will continue to move toward greener, sustainability efforts.

Question: As a season ticket holder, I am interested in hearing what you see the new season holding? What about your new location?

Answer: I don’t think there will be a marketing campaign for the new ballpark once it is established. Hopefully the politicians will work it out. You won’t see a lot of threats about us leaving town but you will see a new ballpark without a lot of hoopla.

Tom Hoof joined the Rays in 2006 and has oversight over both marketing and community relations. He played a key role in coordinating the team’s launch of its new name, colors, logo and uniforms in 2007. He is also largely responsible for developing the team’s image and advertising campaigns. Armed with 10 years of experience at Walt Disney World Marketing as director for the top 20 markets including Florida, New York, Los Angeles, Dallas, Philadelphia and Atlanta.