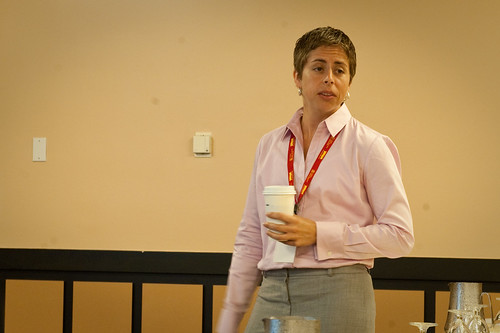 Did you know that in Algeria, nomadic camel shepherds protect their baby camels in SUVs? The speaker for this session, Lettie Solaun found this out from her experience as an international public relations specialist for CH2MHill.  Her client was about to proceed on a project that would produce occasional sonic booms in the area. The challenge arose when they were trying to communicate this message to one local group, the nomadic camel shepherds.  Focusing on the background of the area and the practices of the shepherds in particular, Lettie learned that the shepherds would use SUVs to keep them safe.  So what was the best way to communicate with them…at the local Petrol station of course!

While many of us don’t consider nomadic camel shepherds one of our stakeholder groups, the principle remains, background knowledge about your stakeholders is always going to help. Every situation is tailored. You just need to know your audience and find out what your drivers are.

According to the U.S. Census Bureau, by 2042 minorities will be the majority in the U.S. Also with many of our interactions taking place in an increasingly global world, we all need to know how to “glocalize.” No, it’s not a typo. As Lettie described, glocalizing is thinking globally while speaking to the international flavor of your audience, on a local level.

PR professionals can spruce up their global knowledge by studying the International Standards of Communication as provided by the World Bank / International Finance Corp. Other good principles to learn include the Equator Principles and the UN Global Compact.  It is your role to counsel your client on the international best practices. There may be times when a client does not like what you are going to say, but your role is to frame it as you are looking out for the client’s best interests.  Then there are times that you can only do what you can do.

To clarify this point, Lettie provided an example of how the largest liquefied natural gas facility in the world considered the social, communications and health aspects of working on a pipeline construction project in Asia. The project had 10,000 male workers in a small area, and very close by there was a cottage industry with many women. Seeing the writing on the wall, the company procured 1 million condoms and planned to distribute them to the male workers to prevent the spread of disease. The government would not allow it, so not wanting to waste their large investment, the company transferred the condoms to another facility in Nigeria. Sadly, with the construction of the pipeline, there also was a rapid increase in the HIV virus.

As with any public relations project, the foundation and starting point should be research. When researching, Lettie recommends starting nationally and then working toward the local level, paying particular attention to who you are talking to and what their values are.

Internationally, you must also consider if there are social hierarchies for communication. In Qatar, there was a flaring project that needed some help with issues management to let the residents know what was going to happen and what the company was doing. Knowing their historical narrative and understanding their story, the company was able to identify a strategy. In the end, they had success in distributing the message by having a man talk with five men from five different and prominent families who happened to get together every morning for breakfast.  Knowing who your audience is helps make the difference.

Lastly, we took a brief look at Lettie’s area of expertise, Hispanics and CSR. For development of a successful strategy, she suggested putting together a cultural profile using online research, a university library system and asking professors to share their knowledge. For Hispanics, there are shared beliefs in family, religion, a collective culture to cling together, having a positive and pleasant outlook, and an honor of the hierarchy.

Philanthropy is an age-old tradition within the Hispanic culture, but many prefer to give informally rather than giving to a big organization. Many in the audience had examples on how Hispanics are able to give informally such as collecting clothes for friends, taking care of sick neighbors and giving hotel shampoos to the elderly and less fortunate. With all the examples it was apparent that Hispanics in general prefer the interaction and want to see the results of their philanthropic efforts to satisfy an immediate need.