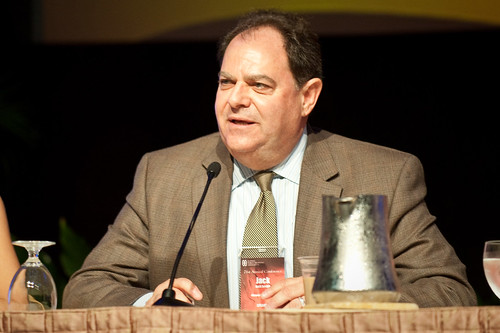 Focusing on Audience, Messages, Messengers, Methods and Outcomes gives any organization, public entity or business the tools to capture interest and leverage action. Led by Jack Levine, the AMMMO strategy allows the proper balance of creativity and flexibility, and promotes conversations with the target audiences for maximum relationship development.

One of the amazing things about Jack Levine is, once he’s met you he knows you for life – even if you haven’t seen or spoken to him in years. Now that’s public relations. For Jack, it is very much about building and maintaining relationships. Does that work? Consider the unsolicited comment from Lauri-Ellen Smith, APR during the PR Under Fire ­general session earlier in the day. Lauri-Ellen, special assistant to the sheriff in Jacksonville, said she first met Jack in the early 1980s in Tallahassee and it was the first time she realized that her “vocation and avocation could be one and the same. It opened my eyes.”

Amid a tech-heavy conference jammed with New/Social Media, Jack’s presentation may be considered somewhat old-school. He used a good, old-fashioned flip chart and markers.  But there were no complaints. This blog will relate Jack’s concepts in the reverse order presented, primarily because the title of the talk focused on his AMMMO approach; just think of the others (Advocacy Bridge and Crossroads) as frosting on the cake, or value-added.

This uses a sequential approach because before you know the action you want people to take you have to know your audience first. If any one told Jack their audience is the general public, he’d tell them to “go back to PR Kindergarten.”

Audiences – It’s all about demography: in the 1950s there were basically three generations, – children, parents and grandparents. Your grandparents were as old as it got; in these past two generations added another generation … and we’ve added a whole other audience generation. Those in their 50s and 60s have never been as young as they are now. When Jack’s  father came to this country, life expectancy was 47. When they passed the retirement act in 1967, they were joking in the cloakroom about 65 because who would live that long? Why is this important? Consider that today, $7 out of $8 donated to charities are given by people over 50. How do you get younger people engaged in an organization? They’re not going to give money; what resource do they have? Time. Any organization that doesn’t have an outreach strategy is missing the boat.

Messages – A message is not a slogan, a slogan is a kind of message, but you can’t put a message on a bumper sticker. A message is a “factual and emotive statement with a purpose.” It has to resonate with your target audiences.

Messengers—This is the deliverer of the message. Now here is the rub: there are some entities acting under the delusion that there are single messengers. Your messengers have to be as diverse as your audience, and should be members of your audiences. You’ve got to look for the strategy of co-joining these three … so your audience is going to take action this because they have credible messengers delivering a factual and emotive message.

Methods – There are so many, Jack said he can’t even mention the first hundred. Face to face? Yes. In meetings? Yes. But your message has got to reflect their audiences. Have you ever noticed that every backporch light has a spider web around it? That’s because that’s where the bugs are. You need to be where the bugs are. If you want to work with 20- year-olds, don’t go to the Kiwanis meetings.

Remember, your audiences, message and messengers (your AMMMO) are always changing. So, If you’ve got a strategic marketing plan that’s more than a year old, revise it.

(2) Advocacy Bridge With consummate artistic skill, Jack sketched two communities on the banks of the “Red River.” On the left bank were those who Know Most, Care Most and Do Most for a cause. On the other side were the DMs—decision makers – who made all the decisions pertaining to politics, media, business/corporate, philanthropy, civic causes — in short, all the decisions about the left bank folks (the KMs, CMs and DMs). Thirty years ago, the KMs, CMs and DMs communicated by calling across the river, “Hello over there … we have some good ideas. Do you hear me?” Nope. The DMs on the right bank did not: Individual shouting not a good communications device over a great divide.

Some brave communicators jumped in the river individually, arrive wet and out of breath. They needed a change in strategic communications, so they borrowed the philosophy of civil engineers: build bridges, first build foundations, then raise stanchions (yes, Jack takes analogy pills every morning). Here are the stanchions:

Data – oh ,how boring. After all, the word “number” starts N-U-M-B. If you don’t know your numbers, if you can’t articulate the cost of, the how many of, then you’re a non-starter. Every DM I know … wants to know how many. This is Florida, so old data is no data.

Advocacy – Strategic communications. Jack said, he’s not sure people understand what pubic relations is.  He said “strategic communications and advocacy” are more exact in what the profession hopes to convey and achieve. The root of “advocacy,” after all, is  voca, or voice.  Hopefully it’s a voice of authority, credibility.

Says Jack: “Here’s the magic, when you build a bridge to your intended audience of decision makers, then you pave the roadway and something really amazing happens. The KMs, CMs, DMs are more comfortable, they’ll traverse the great divide, and the Decision Makers will traverse this well-constructed bridge. It’s a test that they’ll come to you if you make your case in this way.”

(3) Crossroads – Every day Jack said we should ask ourselves, where are we? “The profession is at this unbelievably complicated crossroads all the time. There’s politics, policy, media, programs, civic, business and philanthropy. The purpose is to get them all coming to you. Only way is to entice them to come your way. Each of these roads has its own driving rules.”

As just one example, Jack noted the pressure on the Media to make decisions every single day. ” Other than emergency medicine, the military or law enforcement, I don’t think there’s any more stressful job … ” For those who complain that the Media doesn’t get it right, we need to ask ourselves, do we know all we need to know about what they need to get the story right for us? Because these (media) folks, with or without us, they’ll get the story out. It’s like learning to ride a bike, once you got the momentum and cadence, you got it. This profession is changing, we need to hop up on the seat and get steering.”

(Just as an aside, Jack does not believe traditional media is dead or dying. He pointed out that yes, they’re in transition, and yes they’re laying off a third of their staff. But while only 40 percent of adults read a paper  in full every day, the thing to remember is that 100 percent of Decision Makers do. “The folks who make decisions want to know what’s in their daily paper. If anyone is trying to tell you that New Media is better or more important than what’s in their daily paper, they’re not telling you the truth.”)

Jack Levine, founder of 4Generations Institute, is a communications and public policy consultant. He previously served as President of Voices for Florida’s Children for 25-years. Jack’s expertise is in developing and delivering messages to the media, public officials, and a diverse network of advocates on the value of preventive investments in children, parent leadership, grandparent activism, and dignified services for elders. Jack serves as Partnership Director for GRAND Magazine, a national publication reaching out to the some 77-million Baby Boomers in their active and energetic grandparenting years. He holds a Master’s degree in Child Development and Family Studies from Purdue University, and a degree in English Literature from Hunter College, City University of New York. Jack served on the charter board of Voices for America’s Children, teaches political science at Florida State University and advises the University of Florida’s College of Law. He was a founding member of the Florida Commission on Responsible Fatherhood. In his spare time Jack is an avid photographer and serves as a gourmet cook for friends. A native of Long Beach, New York, Jack has been a teacher and urban youth counselor, and for four years, worked as a waiter and dining room captain in resort hotels in New York and Miami Beach. A graduate of Leadership Florida, Jack was the first recipient of Leadership Florida’s Distinguished Alumnus Award.  He has been honored with the Florida Juvenile Judges’ Media Award, the Voice for Children Award from the Children’s Home Society of Florida, and was named Floridian of the Year by the Orlando Sentinel. Jack and his wife, Charlotte, have two sons – Aaron and Josh, both graduates of Florida State University and currently working as educators. And, inspired by the magic of grandmother’s power in the dining room,  Jack cooks for friends of friends once a month. He’s been doing that for five years and says its a great way to meet new people. Get in touch, he may just cook for you.