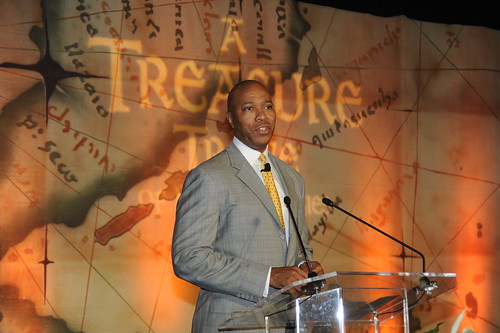 David Griffin had humble beginnings. He shared with the FPRA conference attendees his struggle growing up in Cleveland, being tall, but skinny and not as athletically adept as most 6 foot 5 inches tall 14 year olds. However, his goal to become an accomplished basketball athlete — and the discipline that it required —enabled him to achieve many milestones.

David was Cleveland North Senate’s Most Valuable Player as a high school senior; he earned a full athletic scholarship to Penn State University, where he was selected as team captain during his senior season and he went on to play professional basketball in Europe.

His desire to achieve beyond basketball led him to further his education, earning a Masters of Business Administration from Lake Erie College and a law degree from Cleveland Marshall College of Law.

His accomplishments certainly didn’t come without challenges or lessons along the way. He gave the audience some insight about what it took to accomplish goals and dreams and become a leader.

Some highlights from his presentation:

Leadership is an Inside Job – “You have to have the ability to manage yourself before you can manage others.”

Share Your Thoughts  – “If you have a dream, write it down, verbalize it to yourself, tell somebody else so that you can be held accountable.”

Lead Yourself ­– “If there is anything you really want to accomplish, you have to have a burning desire to get it done. You CAN do it. If you work as hard at what you must do but don’t exactly want to do as much as you work hard at the things you love and want to do, you WILL be successful.”

Set the Next Goal ­– “Goals, dreams and vision are real. Don’t forget to set the next goal after you accomplish your original goal, and so on and so on. Don’t rest on your laurels.”

Believe First in Yourself – “People will try to knock you down, will bully you and tell you that you aren’t good enough. Ignore them. They don’t matter. Stand up on the inside – just hold on and believe in yourself. It will get easier day by day. Have enough belief in yourself for everyone around you – it will spill over and encourage them too.”

Lead by Example – “Be a leader in how you conduct your affairs. Be a person of your word. Say what you mean, mean what you say and do what you say you’ll do. People are always watching – live with integrity and you will lead by example.”

Thank you so much David, for a moving, touching and heartwarming presentation and for closing the FPRA Annual Conference on a high note, sending the participants off with inspirational thoughts.

David Griffin is a licensed attorney and has operated his own consulting firm in Tallahassee, Fla., since 2003. Prior to starting David Griffin Consulting, he held positions in athletic, public and private enterprises. In 1999 Griffin was appointed Secretary of the Florida Lottery by Gov. Jeb Bush and led the operation, management and revenue performance of the agency. During his tenure, the lottery achieved four consecutive years of record-setting profits and the lottery’s operating budget was reduced by 8.5 percent to $126.5 million while revenues increased from $2 billion to $2.8 billion. Griffin’s other positions include assistant executive director of the Ohio Lottery Commission, labor relations manager for Bailey Controls Company and MRI marketing manager for King’s Medical. He also played one season of professional basketball in France.