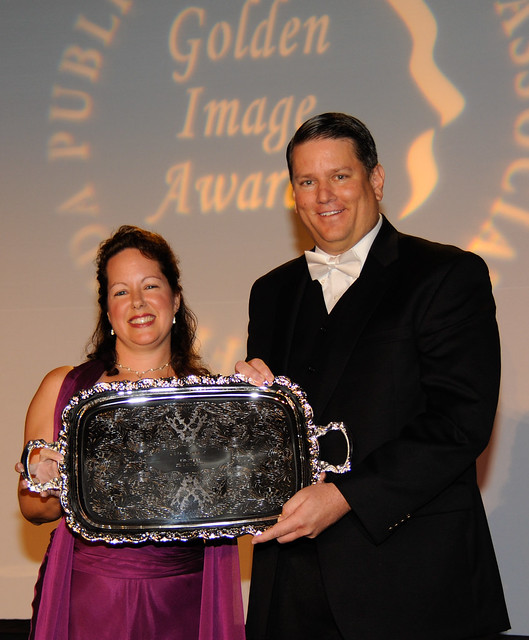 As part of tonight’s Golden Image Awards ceremony, three individual awards are given. The first award is the 2011 FPRA Member of the Year Award. This award recognizes one member who has made a significant contribution to the Association through outstanding leadership, demonstrated enthusiasm, extraordinary involvement and loyal support. The recipient is selected by the FPRA State President.

It is my honor tonight to present one of our association’s top awards – the Member of the Year.

Per Association Policy, the Florida Public Relations Association Member of the Year Award is intended to recognize one member who has made a significant contribution to the Association through outstanding leadership, demonstrated enthusiasm, extraordinary involvement and loyal support.

It is the responsibility of the President to choose the member to be honored. As I thought about who in our Association meets these criteria, one name kept coming to mind again and again.

This member is, and has been for many years, very involved at both the local and state levels. Locally, this member has been on the chapter board for 13 consecutive years serving in numerous positions such as newsletter editor, webmaster, online communications, technology and chapter president. Committee service has been just as rich including Roast & Toast, Image and Media Roundtable.

This year he served once again as the chapter’s VP of Technology maintaining the chapter’s presence online and in social media. In this role, he handled event announcements, designed a holiday e-card, took chapter photos, posted Facebook, Twitter and website updates, and has started the production of a new chapter website. He taught an Image workshop and served as an Image judge. He set-up an annual membership survey in Survey Monkey and handled incentive drawings for those completing it. He and his family also volunteered and participated in the Chapter’s Community Service Feed the Homeless event.

At the State Level, he has served for six of the last seven years on the Executive Committee as VP in positions including Golden Image, PR, Communications and Technology.

This year as VP of Technology he initiated development of the new FPRA logo, created or reinvigorate our Facebook Fan pages, established the FPRA Channel on YouTube, monitored Twitter feeds, worked with chapters on their social media, monitored online graphic standards, served as Association Photographer and ran the blog team (which he actually started in 2006).

He has been a luncheon speaker/workshop presenter at the Gainesville, Nature Coast, Ocala, Orlando Area, Space Coast, Treasure Coast and Dick Pope/Polk County chapters as well as the student chapters at both UCF and Rollins College. Over the years he has also served on numerous association committees including the Technology committee that helped commission the association’s new website in 2009.

He has chaired the Scholarship Fundraiser twice including in 2005 when I was conference chair and we held the event on the Yacht Starship in St. Pete.

He has donated personally to our Education Foundation while coordinating a matching gift from his employer, solicited numerous items for our Auction Fundraiser, solicited sponsors for Annual Conference, and donated in-kind items through his company.

And from a Personal/Professional standpoint, in the last 15 months he has completed his Master’s in PR from The George Washington University, graduating Valedictorian, earned his APR and his CPRC and had his 6th child with his wife of 18 years.

Orlando Chapter President Wendy Jo Moyer, APR, said “he continues to amaze me daily, and I wonder if he ever sleeps! Not only is he the vice president of corporate communications for the Kissimmee Utility Authority, the father of six children ages newborn to 17 and a regular volunteer in the community, but he also donates countless hours to FPRA. He is truly deserving of this award as his efforts continually exceed expectations.”

And I couldn’t agree more. Seriously, I do not think he sleeps.

I am sure you all realized early on in this presentation who the 2010-2011 FPRA Member of the Year is, so I will not delay any further in welcoming him to the stage – please join me in a hearty round of applause for Chris Gent, APR, CPRC.