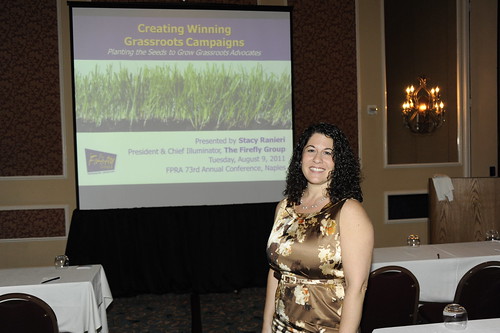 “The public is the only critic whose opinion is worth anything at all.” –Mark Twain

Public relations communication with citizens in community-based projects often inspires passion and emotional reactions from members of the neighborhoods affected, bringing both new opportunities and challenges to garner support.  However, relying on core values of public relations such as outreach, truthfulness and transparency provides the tools necessary for winning advocates in a grassroots campaign.

Stacy Ranieri of The Firefly Group used case studies to exemplify the importance of proactive communication, media relations, and identifiable project branding to promote projects in communities where people are naturally hesitant about change.

The Birth of an Opposition Group
When a property owner of a rundown 20-acre mobile home part wanted to redevelop the land into single- and multi-family homes, the project had great potential to improve the debilitating neighborhood.  Neglecting to reach out to the public and communicate the positive effects before moving forward with the plans, however, overshadowed the benign intentions and created a feeling of distrust when the citizens’ introduction to the project came through flyers announcing the plans hanging on street posts.

Concerned neighbors that had previously not been organized banded together in anger, resisting the changes and attacking the land owner and project.  They held a town hall meeting where emotions ran high, and the project company never got to make a presentation and explain their perspective.

Another public meeting was held, and the project company attempted to communicate with the citizens, compromise and get community feedback, but the damage had been done.  Despite government approval to proceed, the project continued to meet resistance, receive bad press and be targeted by lawsuits.  The resistance born from a lack of early communication led to the formation of a new group of activists who used their initial unpleasant experience to propel oppositions around the area.

Takeaway – Earning trust early through public outreach and education opens the doors for creating advocates and compromise.  There is infrequently the opportunity to effectively start over with the relationships and communications.

The Farmtown Plan
A large, family-owned tree farm developed a 50-year sustainable development plan to protect the natural resources while generating money for the owners.  They committed to preserving 75% of the land and tied the building of the homes with job development.

Beginning their communication six years before the plans took effect, the property company created a website and collateral to educate the public and brand the project.  They used images that showed the beauty of the property while reinforcing that it was a tree farm and intended to generate revenue.  Extensive research about the opportunities to both preserve and develop the land was conducted, and the results were shared with the community.

Their outreach paid off when, despite vocal campaigning by an opposition group who fought with misinformation and fear, the project received overwhelming support to continue from community groups, environmental activists, and government agencies.

Takeaway: Early outreach, education and access to information create support groups that will be on your side and advocating when contention arises out of perceived concerns.

AgTEC
King Ranch had 1,700 acres of citrus growth dead from citrus greening and wanted to do something with the property that was appropriate for the community and appropriate for business purposes.  However, being located outside of urban service boundaries intended to contain growth presented a potential concern from the community.

Once again, reaching out to the public early to share their desire for diversity, environmental preservation, restoration and agriculture, in addition to the development, helped the company gain support early on.  They also researched and promoted the opportunity to store, clean and filter water from the nearby polluted river as a service to the community.

This particular area, however, had a well-funded “no growth” group who was so focused on preserving the way of life in the community, they were not motivated to hear or share positive news and proceeded to advertise false information in attempt to scare the general public into resistance.

While it was challenging to remain respectful and maintain transparency and honesty with people who were not fighting fairly, the truthfulness and integrity of the landowner lent overwhelming support from businesses, community activists and other advocates.  Frivolous lawsuits challenged the now-approved project on technicalities such as typos in the project documentation, the project pressed on and will now begin to bring in jobs, develop land and environmental restoration.

Takeaway: people are concerned about what’s happening in their back yard and will always have an effect on their communities and public policy. If you’re doing something good for the community, you should have no reason to not want to reach out to them early and talk about it.

“Never doubt that a small group of thoughtful, concerned citizens can change the world.  Indeed, it’s the only thing that ever has.”  –Margaret Mead