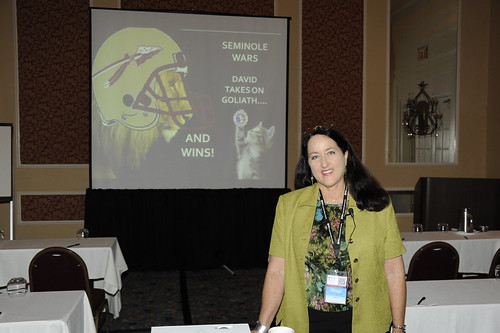 If you follow all the college football preseason polls and predictions, you already know that the Florida State Seminoles are expected to be one of the top teams in the country this season and are not expected to lose too many games. One matchup that they have already lost recently is the fight against Seminole High School, to stop their use of the Seminole name (and logo) as a mascot. Margi Baskerville Nanney gave a wonderful inside story on how Southeast High School (David) took on Florida State University (Goliath) and won.

It all started with a letter……

On August 23, 2010 the School District of Manatee County received a letter from The Collegiate Licensing Company stating that the school district had ten days to stop using the Seminole logo and specific wording of SEMINOLES, NOLES and spear design. The Collegiate Licensing Company sent 200 similar letters throughout the country that same day. Only one school district fought back and that was Manatee County.

“They were aware of Southeast’s use of the logo for many years and never had issues with it…after that long, there is no issue with the use of the marks.” – John Bowen, Manatee School Board attorney