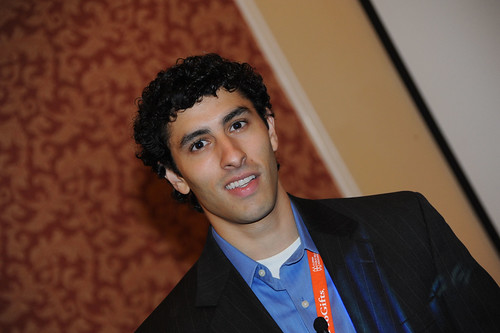 With a video that showed the current evolution of social media, SoBe Lifewater brand manager Rami Jabaji, launched into a presentation with statistics, video and case studies to demonstrate why public relations professionals should rethink the use of digital communication channels. In his role at Pepsico, Jabaji manages the Facebook, You Tube and Twitter pages for SoBe Lifewater, as well as media and promotions for the brand.

His background is diverse and extensive, and not all related to public relations and marketing. He has a background in computer science and he earned his MBA from Duke University. He also spent five years at Lockheed Martin. An avid media consumer, Jabaji admits that he deposits his paychecks directly to Apple.
Below are highlights from his presentation, which was entertaining, thought-provoking and informative.

Integration:
Jabaji’s opening line was telling the group there is no digital world anymore; it’s one seamless integration. To demonstrate this, he asked a series of questions:

When you use and interface with technology, are you missing the moment because you are so busy documenting it?

Are we really alone when PDAs, iPhones and laptops make it easy to connect with anyone?

As a result of integration, communicators must now consider how their campaign, programs, product or messages will work in multiple environments both online and offline.

Jabaji presented a case study on Farmville, which took an online gaming experience and set it up so that users can gain points when they buy products in the real world. The creators were able to connect grocery store products, such as fruits and vegetables, to a web-based game integrating offline with online.

Influence:
Who’s more influential, Ashton Kutcher or CNN?  In some instances, consumers will believe Ashton more than CNN. Seventy percent of consumers believe the comments they read online. Consumer comments are one of the most trusted forms of advertising. They don’t trust banner ads or digital ads.

So what does this mean for professional communicators? Don’t hide anything. You will get caught in this world of social media. Be transparent. Consumers and social media users are savvy. You can’t assume they are naïve. Also, have a contingency plan and be ready for the worst case scenario.  It’s all about relevance…know when and when not to say something.

Case Study: Vitamin Water is SoBe’s biggest competitor and they jumped on basketball star LeBron James’s announcement regarding whether he was going to stay or leave Cleveland. During the “LeBron Show” on ESPN, Vitamin Water placed their products all over the interview set and placed ads throughout the program. The result based on social media feedback: it didn’t work. The consumers who saw the product placements during the programming Tweeted negative responses with one respondent saying, “Vitamin Water needs to get a life.”

The Power of Viral Videos:
Jabaji then talked about the power of YouTube and said with its huge viewership, the site is a great channel for public relations and social media communicators. Most videos that go viral are supported by outreach and other media.

To be successful, Jabaji says you have to create content that is compelling. He also cautions that you don’t need to build a network. Instead leverage existing networks with huge viewers, like College Humor. Determine which YouTube sites can help you connect with a huge content base.

Other tips for YouTube success: Pick the right title and thumbnail. Be sure to tag, tag, tag.

At SoBe, they plant seeds and water the ones that grow by placing ten pieces of video on YouTube each month and then supporting only the ones that generate the most viewers.

The Future of Facebook:
So what is the future of Facebook?  Jabaji says the platform is getting ready to add location tracking to your status updates similar to Foursquare. When that happens, they may crush Foursquare because they’ll automatically have 400 million users telling everyone where they are located whenever they update their status.

Another change coming to Facebook is the addition of more plug-ins allowing people to login from other platforms, like Pandora.

Despite all of this, Jabaji says Facebook users are declining and more teens are leaving Facebook or using it less because their parents joined. He said a great blog to read about the teen decline is Oh Crap! My Parents Joined Facebook.

What are the other reasons people are leaving Facebook? Studies list the following: lost interest, it got boring, too many ads, got tired of keeping up with all of the activities, and privacy concerns.

Social Media Fallout:
What will be the fallout of social media? Privacy and the re-emergence of real life social networking. Jabaji says more people are starting to detach from their mobile devices and computers to begin engaging people face-to-face again.

When Burger King asked people to sacrifice (drop) ten of their friends on Facebook to get a free Whopper, the campaign was so effective that Facebook ordered them to shut the program down.

The Website “Please Rob Me” was launched to remind people to stop using their social media pages to let everyone know when they are not at home. Privacy will take center stage as social networks continue to flourish.

The Next Frontier:
Jabaji said mobile communication is the next frontier and we are evolving the way we interface with technology. From touch (iPad), speak (google talk), and gesturing (gaming), how we interact is changing. The barriers to communication are increasingly diminished…from iPhones to PDAs, people can do what they want, from taking high-end photos to creating music with an iPhone. As a result, communicators need to consider mobile technology and communications in their strategies and tactics.

More Choices:
Jabaji reminded the group that although there is a proliferation of choice, people are still watching TV. But their experience is now enhanced.

People are more likely to remember your brand, product or campaign if there is a high level of engagement with television. Integration is more powerful than traditional advertisements. For example, during the season finale of Lost, Target stores ran commercials that used imagery from the TV show to promote products.

TV is also connecting to the web, allowing people to watch their program in high definition (HD), connect online to view products and information they saw during a show, then use social media to communicate about it.

At the end of his presentation, Jabaji shared the following closing thoughts:

– There is no digital world
– Influence has shifted
-Viral videos work, if done right
– As social media evolves, privacy will have a bigger impact
– Mobile communications is the next frontier
– And more and more people have a choice of where to get their information.

As communications professionals, we need to know how to use all of these digital channels to be highly successful in this emerging digital world.