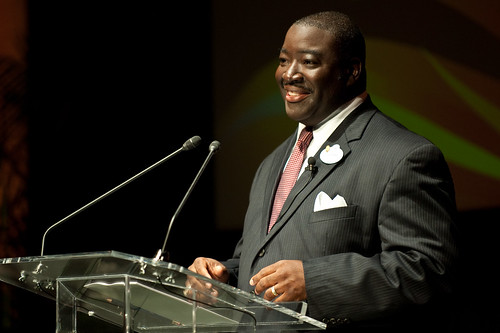 No Disney experience would be complete without music and magic, and these days, no business would be complete without a corporate responsibility, or corporate social responsibility (CSR) program. The Walt Disney Company strives to combine both. As with its theme parks, hotels, and cruise ships, Disney works to make its CR programs a seamless experience.

According to Tourism Central Florida, the Orlando Sentinel’s blog covering local tourism business news, Walt Disney World gave $32.5 million in direct cash and in-kind donations in 2008 and is striving to give as much in 2009. In May, Disney awarded $700,00 in grants to 34 central Florida nonprofits that work with children in four specific areas: connecting with adults, constructive use of free time, character development and compassion.

The Walt Disney Company published its first annual corporate responsibility report in March 2009. (Disney has issued an annual “Enviroport” since 1989 that lays out its environmental practices.) Photo albums, animated charts, and links are some of the interactive features that make the report easy and interesting to browse. The report covers Disney’s strategy for improving the lives of park Guests, central Florida residents, and others affected by Disney’s business practices while increasing shareholder value through refinement of existing programs and development of new business ventures.

Campbell cited a 1987 Brundtland report that defines sustainable development as the development that meets the needs of the present without compromising the ability of future generations to meet their own needs. Disney focuses on CR to further stand out in the entertainment industry and exceed its fans’ expectations.

In other words, CR is ensuring you’re operating in a way that supports your community’s future and makes you proud to be a member of your business. This is pretty broad, but it can translate into youth programs, environmental management, charitable giving, and other activities that manage the impacts, positive and negative, of your business.

Why focus on CR?

Obviously Disney is all about children and family, so it makes sense that the company would like to support and nurture them by:

Other areas of Disney’s CR focus:

One pertinent question asked after Campbell’s presentation was how has the economic downturn affected Disney’s CR programs?

Campbell responded that they’re finding ways to preserve the programs they have without reducing the level of support. This means not introducing what Campbell calls “new money” in the interest of maintaining actual contributions to nonprofits and youth programs. So far, this has meant reducing ancillary costs like presentation expenses.

CR is beneficial to all who partake, but if no one knows your company is conducting CR programs, no one can hold you accountable nor recognize you for your efforts. CR reporting is a logical step in company assessment and accountability, and a talking point for the start of new partnerships, and a way to report non-financial, non-tangible results your company is making happen in the community. Campbell refers to this last point as managing the company’s legacy – a report is one more way to drive home the legacy you want your organization to be known for.

Disney’s CR report covers its five focus areas using text, maps, graphs, charts and photos. It serves as a systematic approach innovation and planning – when you take the time to think about your organization’s impact on your community, you plan more carefully for the intended result. You take proactive measures to reduce costs (whether that is in terms of money, time, or available resources) using alternative strategies and programs you might not have considered before.

One “side effect” of creating a CR report is that it allows a company to examine internal standards and make sure everyone is on the same page. It’s easy for top administration to discuss and agree on company CSR standards, but communicating these to a larger group of mid- or entry-level employees is more challenging. Taking time to examine what standards are desired, what is possible, and how to create incentives for achievement of such standards takes considerate planning and practice.

It is a way for your organization to demonstrate a commitment to transparency and accountability. Laying out your CR efforts in a written document shows you are serious about sharing the goals you’ve reached, the efforts you’re undertaking to achieve remaining goals and your challenges. By communicating these things, a CR report also fosters dialogue and feedback by giving your stakeholders a real opportunity to learn more about you and voice their praises and concerns. For example, Disney is currently working to reduce the paperwork and other obstacles seasonal cast members face when returning to work at Disney. Streamlining the re-hire process can result in efficiencies that benefit the environment (fewer materials used), the company (less time spent on the process and fewer staff costs) and the cast members (less stress over getting back to work!).

Disney uses its CR report as a way to collect report feedback from cast members, media, stakeholders and shareholders. A well-written and easy-to-follow report makes community relations more like a “coffee conversation” than a behemoth of a topic. It provides the context for Disney to have an open, honest and productive conversation with activists who do not agree with Disney’s content or practices.

For example, The Nature Conservancy has often been at odds with Disney’s development of beach resorts on Florida’s Atlantic coast. The Conservancy has been critical of the lights and noise created by Disney’s Vero Beach resort, among others, for disturbing the natural nesting areas of sea turtles. In response to the Conservancy’s concerns, Disney examined its impact on local waterways, modified operations to be more sensitive around nesting season, and initiated annual coastal cleanups. In this way, a CR report is a useful tool for the evaluation and stewardship aspects of public relations.

A report allows an organization to identify initiatives and politics for strengthening their performance as well. Especially for Disney, the report encourages the administration to work toward greater integration with its core businesses. Disney’s ventures are fairly far-flung: from theme parks to plush toys to fruit juice. A CR report helps cast members as well as Disney’s stakeholders visualize how Disney’s entire business portfolio ties together to accomplish the goals stated above.

If you’re interested in learning more about corporate responsibility (or CSR as some prefer to call it) check out the following two Web sites: CSR Wire, which offers an RSS service and a free daily newsletter), and Business Respect, a Web site/biweekly newsletter by British CSR columnist Mallen Baker. And if you have your own favorite CSR sites, please share them in the comments section below!

Eugene Campbell is the vice president of Community Relations and Minority Business Development, Walt Disney World Resort. Campbell oversees all aspects of Walt Disney World Resort’s charitable contributions and efforts to develop relationships with minority businesses. Under his leadership in 2008, Disney donated nearly $33 million in cash and in-kind support to local organizations in central Florida. Campbell joined the Walt Disney Company in 1999 as senior manager in the Alliance Development organization.

Eugene is active in leadership roles outside of Disney with various community and professional organizations such as National Black MBA Association (Immediate Past President) and Alpha Phi Alpha Fraternity, Inc. Additionally, Eugene serves as a Member of the Board of Directors for The Minority/Women Business Enterprise Alliance, Inc. (Chairman), Disney Entrepreneur Center, Florida A&M University College of Law Board of Visitors and the Community Foundation of Central Florida.